This article introduces some Japanese news about how the Tokyo 2020 venue construction is going.

This article is the translation of Yomiuri Shimbun news and HUFFPOST JP（ Japanese）.  Also, the source of all images is the article.

The theme of the new stadium is ”wind and trees”. 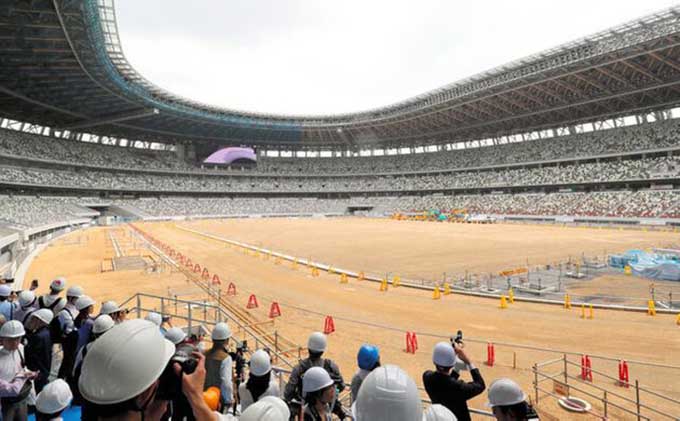 It is a stadium where wood is used abundantly. The architect, Kensuke Sakai designed.

A stadium of “Mori(杜)” that is open to the public.

The appearance of the new National Stadium (Shinjuku-ku, Shibuya-ku,Tokyo) where opening and closing ceremonies and athletics are held at the Tokyo Olympics and Paralympics in 2020 has been clearly seen.

Tokyo Olympics 2020 New  National Stadium was released to the press

On the 3rd of July, 387 days until the Olympics kicked off, nearly 90% of the construction site completed was released to the press.

The keywords representing new stadium features are “wind and trees”.

Reporters entered the first west stand from the pedestrian deck on the south side of the stadium before 11:00 am. It was cloudy this day.

The roof was completed, and a cool wind blew through the concourse.

The person in charge explained, “The natural wind is taken in. The roof covers the audience seats, so the perceived temperature drops by 10 degrees.”

A large fan called “airflow creation fan” was also commissioned to send out the wind.

No air conditioning but cool by natural ventilation

The new National Stadium has reduced the construction cost, so there is no air conditioning in the spectator seats. Instead, cool by natural ventilation.

At the top there is a large eaves leading the wind, and when it is hot it is calculated that cool winds enter the audience seat and cold winds run up in the winter. In addition, a total of 185 “airflow creation fans” were installed on the first and third floors, and mist devices for spraying fog were installed at eight entrances on the first and second floors.

When you are in the stadium, you can see that wood is used abundantly.

We aimed for a stadium that united the hearts of all the Japanese.

That is the thoughts of architect Kengo Tsuji, who was in charge of the design.

A ceremony to commemorate the completion will be held on the 6th at the Tokyo Canoe Slalom Center (Edogawa Ward, Tokyo) in the Tokyo Olympics in 2020, and there will be a trial run by top national athletes such as Takuya Haneda of the Rio de Janeiro Olympics bronze medal in 2016. 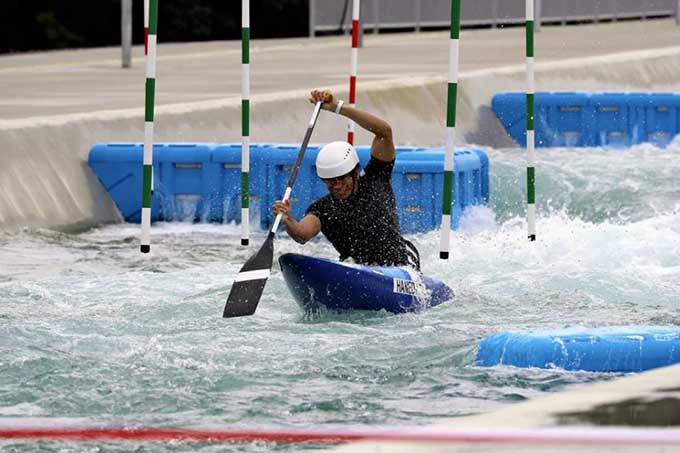 Takuya Haneda who runs a trial run on the competition course (in the morning of June 6, in Edogawa Ward, Tokyo)

At the ceremony, Yuuri Koike, the governor of Tokyo, said, “I want you to support the players in this place.”

Haneda tried running with a brilliant technique, cut the tape provided on the course, and celebrated completion.

The center was built by Tokyo as the first facility in the country where competitions can be made in artificial waterways and was completed at the end of May on 2020.

7,500 audience seats will be available

Within the competition course of about 200 meters in length and about 10 meters in width, a block for changing the flow of water is installed, and the degree of difficulty can also be changed.

At the time of the tournament, there will be about 7500 audience seats.